It’s over a year now since I started work on recording the fifth Neureille album but I still need a few more sessions before it’s finished. I’m happy with the way it’s going and contributions from Paul Wigens, Everton Hartley, Mike Dennis, Pete Judge and Jim Barr have been superb. The next session is going to involve Ant Noel if we can get it together and that then shouldn’t leave too much to do.

In the meantime here’s a couple of improvisations I recorded on Sunday – just me and the loop pedal. The 1st is about 3 and a half minutes, the 2nd 8 minutes something. I thought about adding some words but instead here are the words I was thinking of using – you can always try a voice over of your own. It seems I wrote these at 1am on 2 October 2015. My diary tells me that earlier in the evening I’d been at Jocasta’s open mic night at the Clifton Wine Bar. The text file history tells me that I then modified the words on 3 April 2016 at 11.30pm. My guess is that I then added the last 11 lines and gave the thing a title which is West to East and East to West

A couple of weeks ago I spent a few hours helping my friend Adrian Price to complete a video he had made with a few other people (credits at the end of the video) which was for the good of a noble cause – the Children’s Hospice in Bristol. I’m not sure of the exact story behind the knitted budgies being sent into the stratosphere but can definitely say that it is a tale of a commemoration of a life tragically ended prematurely but is contiguously an affirmation of the power of life, love and the human spirit.

My task in the enterprise was to put the Children’s Hospice logo in the top left-hand corner of the screen. What should have been something simple took many hours though most of them spent waiting for rendering to finish. It didn’t help that I edit on a Mac and the film that Ade gave me was a Windows .wmv, but by the end I realised I could have done it more quickly and easily. I wish I could have a quid for every time that’s happened.

Anyway it’s a great little video with fabulous music from Eyebrow. Paul Wigens has drummed on 2 albums with me and I love what he does with Pete Judge. I think I was at their debut gig – there weren’t many of us.

As I’m writing this I know that Adrian and his brother, Andrew and probably some others are doing another launch at Bestival. It’s a project with a lot of potential.

Adrian’s main project is Soundbeam. I’ll cover that in more detail in a later post which will have some of the great videos which illustrate that incredible product.

The new Neureille album is now available on Itunes. It’s a digital release but I have had 200 hard copies made for promotional purposes. I’m packaging these simply in soft plastic cases with some rudimentary homemade art work and notes.

This is the front cover… 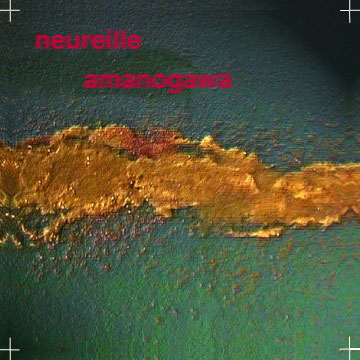 and here’s the back 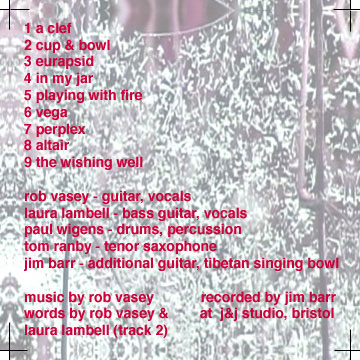 There wasn’t a lot of space for too many words so I’d like to just provide a little bit more extra information here.

Paul Wigens also did the drumming on Disparue. He’s a great bloke and ideal for me to use because of his musical knowledge, experience plus of course his drumming ability. He has a number of musical projects on the go usually, but I’d like to particularly recommend his duo with Pete Judge, which is called Eyebrow.

Jim Barr is another superb musician, his principal musical project being Get The Blessing. He played some guitar on the jam we recorded which was used to produce the 3 extra tracks – Eurapsid, Vega and Altair as well as the Tibetan singing bowl on Cup & Bowl plus all the engineering. But also I should point out that all the recording was done in 2 days and it wouldn’t have been possible to get the tracks to sound as good as they do in that time without his ability to assimilate the music so quickly almost like in the back of his head. For example, most of the saxophone parts were recorded in 3 takes. Pretty much as soon as the takes were done, Jim would have worked out which were the best parts to use.

Someone who isn’t credited at all on the cover who should be is Rob Williams of Ruby Studios who spent a few hours with me tidying the whole thing up and mastering the album.

In addition I want to thank all the musicians in Bristol who have supported and encouraged me, in particular, Everton Hartley and Ant Noel.

Here’s the first song on the album.