I’ve recently managed to complete a film comprising of some footage that I shot about a year ago. It’s called The Great Outdoors. As a soundtrack I used some excerpts from a jam I had with Nick Pullin about 20 years ago. This is something we only did once – at least only recorded once. I’ve searched through the archive and found this image of Nick which I hope he will approve of. 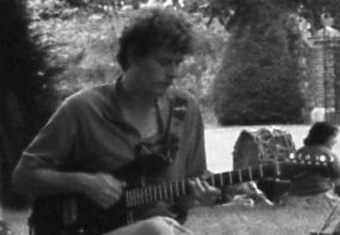 If not I might have to update this page sometime in the future and hopefully change this wording. If not don’t worry. Worse things have happened on the world wide web, or even the whirled woid wedge or thereabouts.

Here is the page for Nick’s band Ilya (or thereabouts) with Joanna Swan, some friends I’ve known for a year or two.

They’ve just moved but they used to live very close to where these images come from so it’s all very fitting.

Now I have new friends in Albemarle Row – it’s funny how life works out. Or so Moses used to say. Apparently.

Here’s the embedded what-do-you-ma-call-it. If you don’t like it, please don’t bother to let me know. I’ll just take that for granted.