In 1974 probably in the 8 week term that is known as hilary I wrote a song which is the oldest song that I have on a cd. In fact I have it on 2 cds. And that is why this the 3rd series of repeated songs exists. The first version was recorded in 1980 probably possibly and as usual as it’s historically a precedent I’m highlighting it first. It’s out there in the world. I was happy that someone else (Chuck Warner) made that decision because to be perfectly frank I didn’t think it was good enough. As a song it’s fine it’s just the recording I’m talking about – not that there’s anything wrong with the musicians, just that if I thought it was going to be released to a wider audience I would have wanted to work and record it better. It wasn’t meant for general public release. But as I’ve said before it’s all there is so that’s in a way irrelevant.

The 2nd version was recorded in December 2007. The people involved were Jeff Spencer, Paul Wigens, me, Immy & Mossy Price. The last 2 just had a cameo role and I’m glad to say that they’re both musicians now although that’s as a result of many more variant influences than me. More female musicians is pretty high up as a goal in my manifesto however.

The 2 songwriters I associate with this song are of course Syd Barrett and Kevin Ayers who initially I copied. (Back in 1971). Most of my early songs were either based on one of the other of those 2. Luckily The Mouse And The Bear is not exactly quite like any song that either of those 2 wrote, I can certainly perceive the similarities. I have an even earlier song called The Story that I can play which is in the same vein. More Kevin Ayers-like in that it has jazz chords. The chord thing with Syd is moving mainly major chords up and down without worrying about basic rules of harmony but he never got round to any jazz chords all that much other than that Bb diminished in Here I Go. Maybe I’ll do a demo of The Story soon that would be nice. Really I ought to be working on the next stage of the coathanger trail but I’m stuck with that difficult requirement and so it’s possible I won’t be able to do that until the spring of 2014. 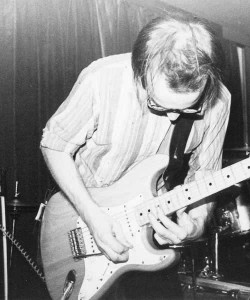 I don’t really care whether people think what I do is good or not. I know what I’ve done and that’s good enough for me.

This is the 2nd coathanger trail post and it covers the words in northern lands which is the 2nd line of the song.

This is the demo version of Alaska recorded in 1978. It’s a bit rough having come off an old cassette tape copy. It’s never been released. But I think it’s worth a listen. I prefer the vocals on the later ep version which is here. I’m pretty sure that this demo was recorded with an amp, maybe even my own Orange combo, more likely a Fender amp that the studio had, but the later version I think was a direct inject affair which I agreed to at the time because I didn’t know any better.

Basically the guitar is a bit more real. Photo above is how I looked playing that guitar. Actually that one was stolen from my car and the one I have now is different but from 1979 so is still vintage usa luckily.

The way Mike and Andrew play is also very real. That was a good band though unfortunately bound to implode.

I’m happy with my current band though. On Friday night that will be myself, Tom Ranby on saxophone (probably alto); Laura Lambell vocals; Rosalinda Moreno-Parra  vocals. Basically if we had done back in 1979 what we are doing now we would have been absolutely astronomic but sadly it doesn’t work that way.

Still there is a rich vein, a steady seam. I’ll put down my trumpet for now.

Here’s the demo version of Alaska