It’s been a long time since I last posted a stamp series so this time I’m combining another category to try and keep the whole category thing meaningful.

Malaysia gained independance in 1963 so this stamp must precede that. Trees usually feature on stamps as incidental but in this case they are central to the image. Deforestation rates are greater in Malaysia than anywhere else in the world. 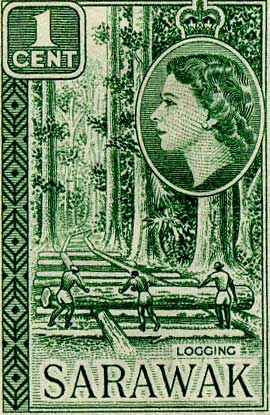 The rand became currency of South Africa in 1961. The random quality of the criss-cross background to the fruit tree is weird. 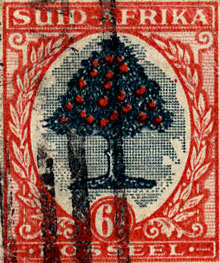 Early shields of Ceylon under Portuguese, Dutch and British dominion all featured coconut trees (and elephants). It’s hardly surprising that Sri Lankan cuisine should feature coconuts so much. In 1432 a Chinese gentleman called Ma-Huan visited Hsi-Lan-Kuo (as he called it) and wrote

The cocoa-nut, which they have in abundance, supplies them with oil, wine, sugar, and food. 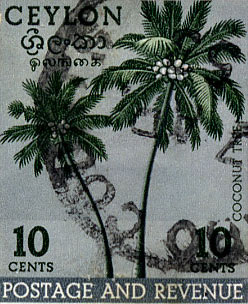 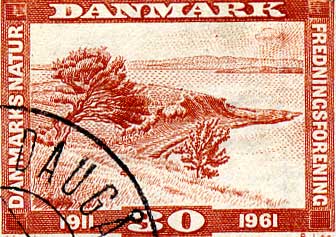 Finally a stamp from my own fair country, Britain I mean, not Sussex. I have 3 more from this series of paintings by Leonard Rosoman, who if he is still alive is about 98 years old. They feature Harlech Castle, The Cairngorms and Antrim. In 2002 Rosoman was the guest on the radio programme Desert Island Discs. The luxury item he chose to have on the desert island was a sloping lawn. I think to maintain a sloping lawn on a desert island would require magical powers. 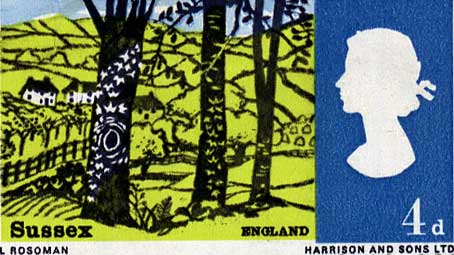 One final point. The first and last stamps both feature the head of Elizabeth II. I think it’s highly probable that no other head has been featured on stamps more often than hers nor ever will be.

when i was in my mid-teens i was fortunate to live in a house with a garden which had 3 40,50 or so year-old trees which i used to climb. an oak a beech and some sort of pine. i would spend quite a lot of time (in clement weather) towards the tops of these trees, probably the beech more than the others, but each had their propensities.

i once wrote a song from the point of view of a tree, but it never lasted. i’ve forgotten the music but i have the words somewhere. if i do another beech trunk video i’ll dig them out and print them. it’s a little bit misanthropic but sometimes it’s true i do object to my own species.

I have called this piece beech trunk number 1. that’s because I thought maybe I could make some variations on this. so more edits both visual and musical to follow.

I make up a lot of instrumentals which you could also call songs without words or in french chants sans mots which could be made into a new word shansanmo. I make up a lot of shansanmo from time to time and usually they don’t get named (individually that is not generically). if I can use one with a bit of film footage then that’s great because suddenly there’s an obvious name there. which can always be changed later anyway if something better occurs. beech trunk is probably not a great name for a piece of music, still it’s better than not having a name at all.

as you can tell I am trying out how to present different forms. text pictures and now moving images otherwise known as films movies videos etcetera

this is the most recent of my youtube offerings. I’m just experimenting really and things will be rough but you hope by just doing it they get better. at least that’s what I’ve found generally. just keep doing it with humility and patience and diligence and keep your critical faculties open and things develop.

I’m putting this in the tree category because I’ve got quite a lot of tree things. trees are important to me and in fact they are and have been absolutely essential for the development of the human race. a few rarer things are now becoming key but they’re not very photographable