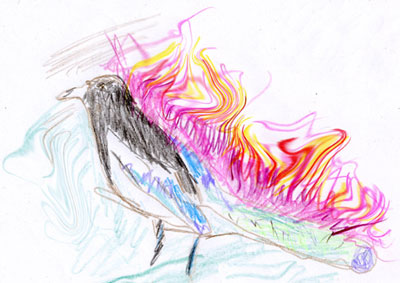 Some 10 to 15 years ago I used to spend frequent evenings playing piano with my friend Dominic Black. Neither of us are particularly good piano players. Dominic could sight-read better than I could, but I was the more proficient improviser. Our most well-thumbed music book was The World Of Piano Duets which were arrangements made by Denes Agay. He wrote one hell of a lot of best-selling piano arrangements and his influence on the lives of innumerable people must have been immense. He died in 2007 – here’s an obituary.

All the pieces in the book are great, but my favourite has to be the Lullaby which is taken from a section of Stravinsky‘s Firebird Suite. Last year I downloaded MuseScore and messed about with a bit of music notation. One of the things I did was to take Mr Agay’s two piano parts and arrange them for 2 guitars instead. The plan was for me to perform the result with Everton Hartley but we still haven’t got around to doing it yet. In order to practise it I need to use my loop pedal. It would be much better to be played live with 2 guitars, and I apologise to anyone listening to it for my not having the patience to work at it a bit harder and play it better.

On the subject of Stravinsky I would like to recommend a great book which is The Apollonian Clockwork by Louis Andriessen and Elmer Schönberger. Musicologically it’s a bit over my head most of the time, but even in the middle of those sections the love at the base of the book shines through.

Here’s the last bit of the chapter that is called The Firebird as Magpie.

True renewal is only possible by the grace of tradition. But tradition is something different from convention.
‘[Conventions] differ from traditions in that they are modified rather than developed.’
In music, it is a good tradition to break conventions.

And finally a chance for me to embed an excerpt from a film of the Pina Bausch choreographed Rite of Spring. Particularly apt for those of us in the Northern Hemisphere as our patient wait for that season nears an end.