Earlier this year I was reading Gerard Durozoi’s book History of the Surrealist Movement and it has brought to my attention a lot of artists whose work was totally unfamiliar to me. Briefly to review the book I would say that it’s an excellent introduction to the subject and there’s a lot of detail about what happened and when it happened but there is little cohesive attempt to give an overall view of what it all meant and perhaps it’s best to leave that to the reader’s own judgement. I’m just going to mention with some links some of the artists that I didn’t know about but was glad to get to know about. Actually there’s a lot of them and this is just a small selection. I’d also like to point out DistantMirror’s YouTube channel which has got some fantastically worked slideshows with great background music which I thoroughly recommend.

To introduce the artists I’ve chosen I’m going to reproduce the biographical notes from the books and then I’m linking to some images of their work that can be found on the web.

OELZE, RICHARD
1900-1980 Magdeburg/Postcholz bei Hameln
German painter. A former student of the Bauhaus, Oelze discovered the works of Ernst and Magritte in 1929, and this would have a definitive impact on the orientation of his own work. In Paris from 1932 on he came into contact with the leading surrealists but rarely joined in their activities, preferring to work on his canvases which the group recognised as being in keeping with their principles. Oelze depicted signs of imminent catastrophe: landscapes in shreds, devastated by winds of mysterious origin; figures prey to an uncertain waiting; an ominous atmosphere that never revealed the actual nature of the threat. For Oelze, painting was a companion to clairvoyance: like a blind man, it was capable of prophecy. (Oelze had directly suffered the effects of history: interned during the war, he had ceased all activity for ten years.) The canvases that came after the 1950s attest to his experience: vaguely human silhhouettes glimpsed in improbable landscapes and decors that were mere remnants, sometimes almost hilarious, of the humanity that survived the cataclysm. And yet one cannot ascertain the significance of their very survival, which can be seen as a sign of either hope or exhaustion. 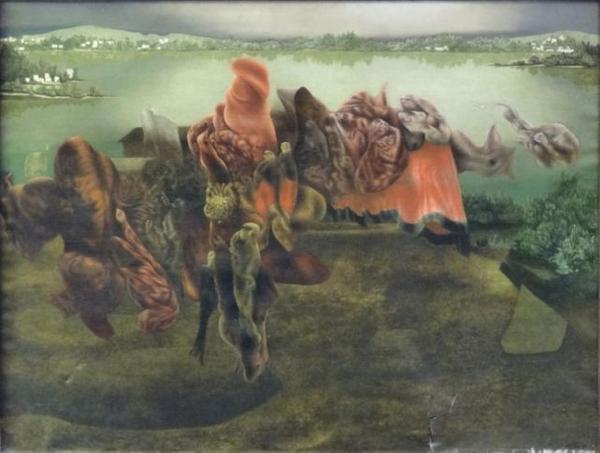 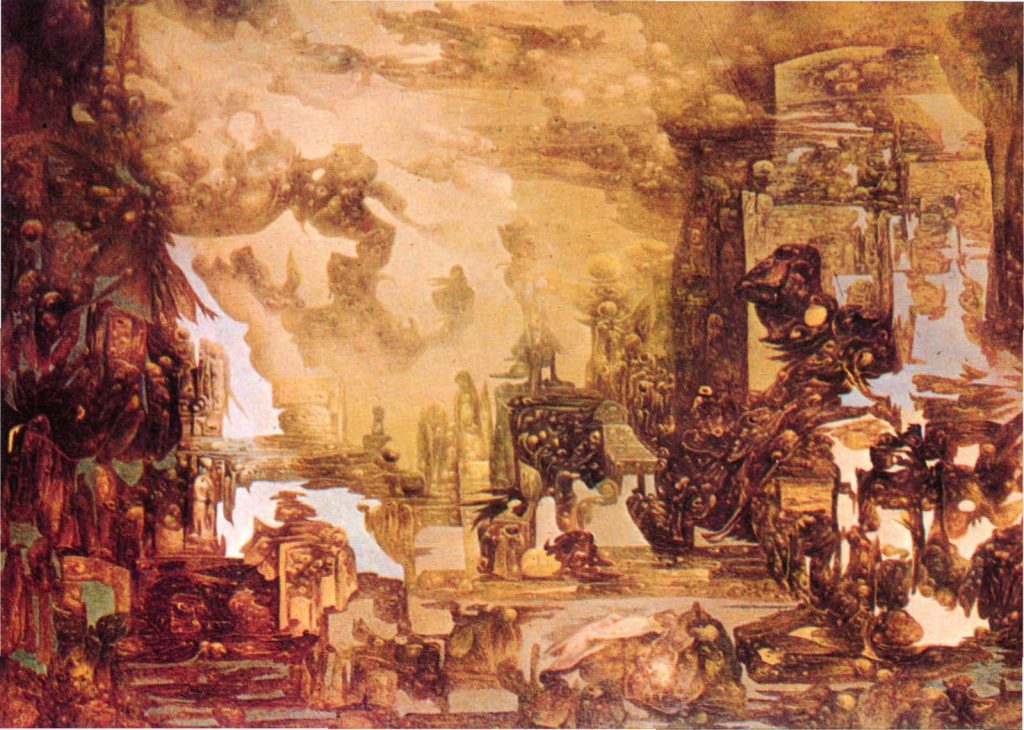 STYRSKY, JINDRICH
1899-1942 Cermna/Prague
Czech painter, photographer and poet. In 1927, Styrsky and Toyen founded artificialism (a pictorial version of poetism, which favours the rights of the imagination). In 1934, Styrsky was among the first members of the Czech group. His photographs were often created in “cycles”. Hostile to purely artistic values, Styrsky was interested, above all, in the relation between the “form” and “content” of a painting. 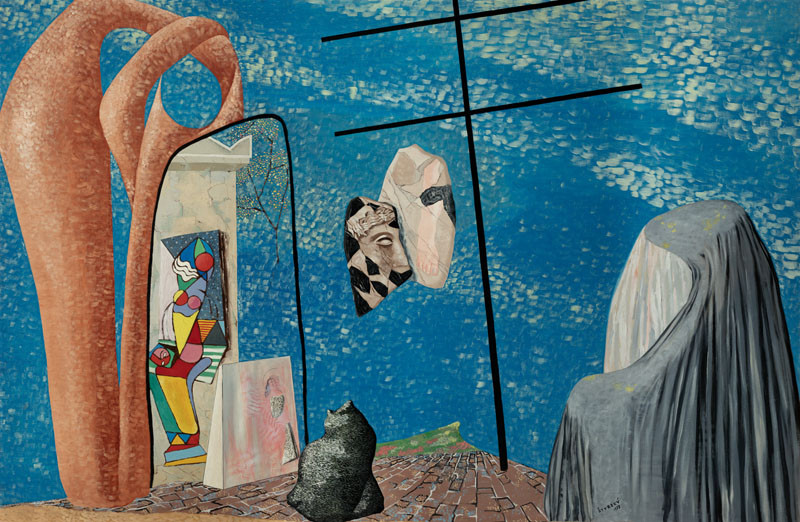 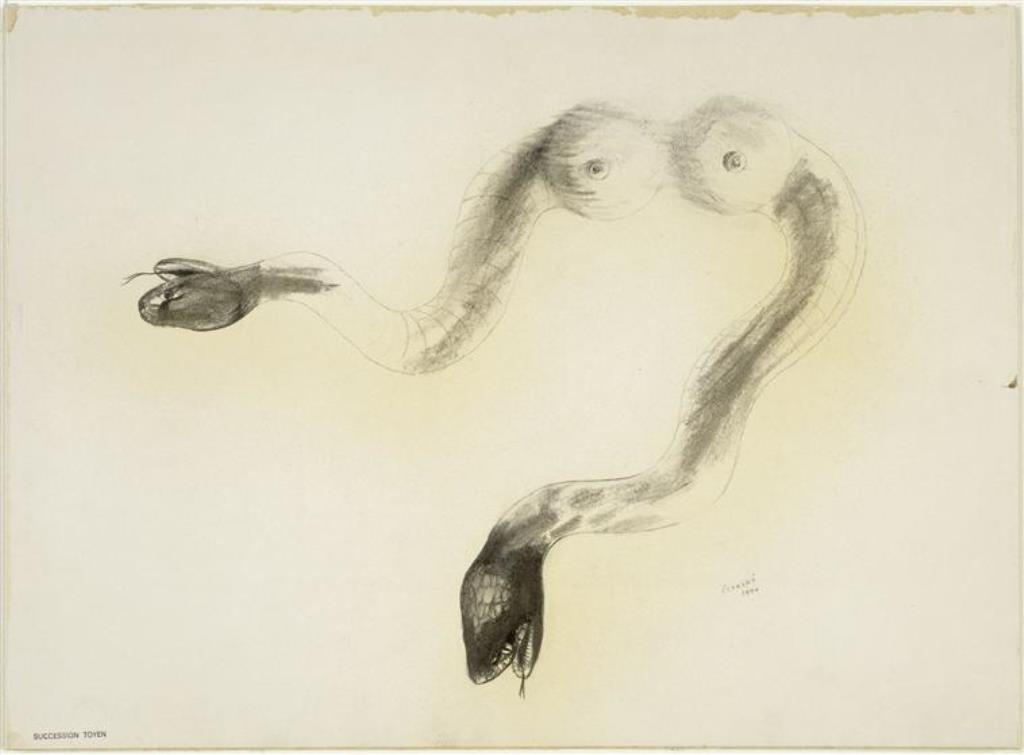 PAILTHORPE, GRACE
1883-1971 Saint Leonards-on-Sea
Painter and psychoanalyst. Pailthorpe studied medicine and was a surgeon in Australia during the First World War: she traveled around the world and only returned to England in 1922. She then became a renowned Freudian psychoanalyst, notably thanks to her research into the psychology of delinquency. In 1935 she met Reuben Mednikoff who had followed a similar path and they married; both studied “psychological art” and began to explore its impact and potential on their own. This brought them to take part in the international exhibition in London, where Pailthorpe’s drawings attracted a lot of attention. She was actually totally trusting of automatism, with a rare freedom. In her painting, she also used automatism to define her shapes, which she would later rework, and she was convinced that surrealism allowed for a reconciliation of the entire psyche. Still with Mednikoff, whose work was equally capable of moving effortlessly from a joyously ironic figurative painting to abstract work where new spaces were created, Pailthorpe also took part in the English group’s events and published drawings in the London Bulletin. For the Bulletin, she wrote an article on the “Scientific Aspects of Surrealism”, where she sought to prove that surrealism allows one to balance the psyche by expressing its inner tensions. The couple exhibited their works in 1939 at the Guggenheim Jeune gallery, and two years later they left the English group to continue their work on their own, never seeking the gratification of fame. By the time Mednikoff died in 1976, it had become virtually impossible to find their work anymore, and most of it seems to have disappeared. 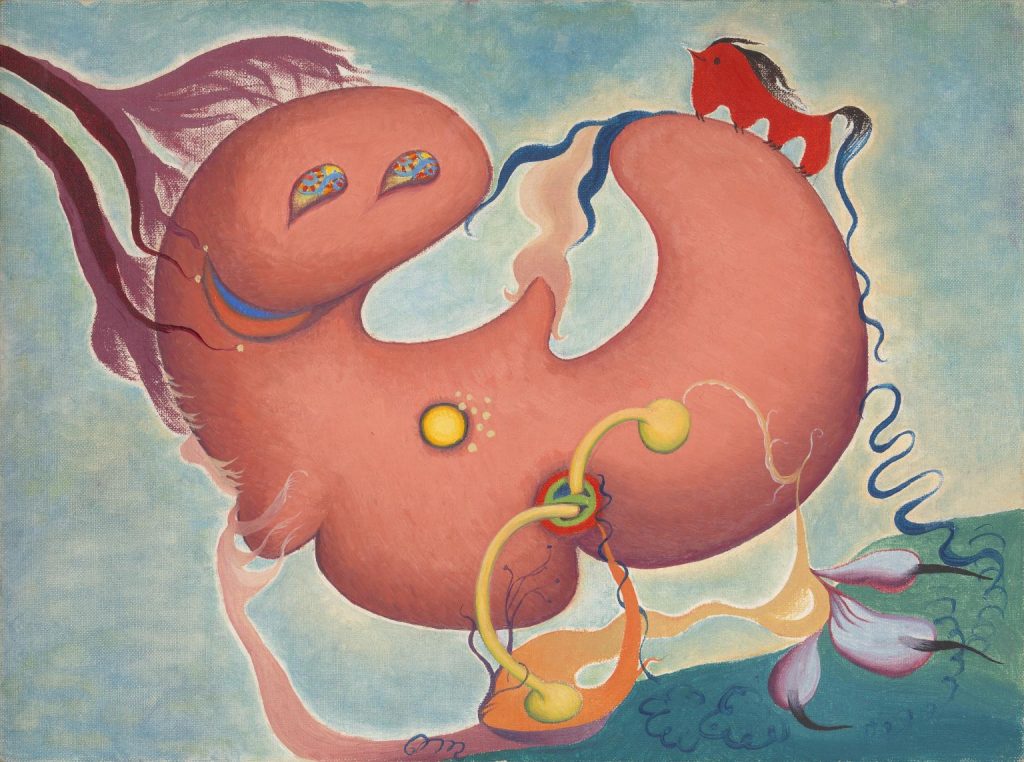 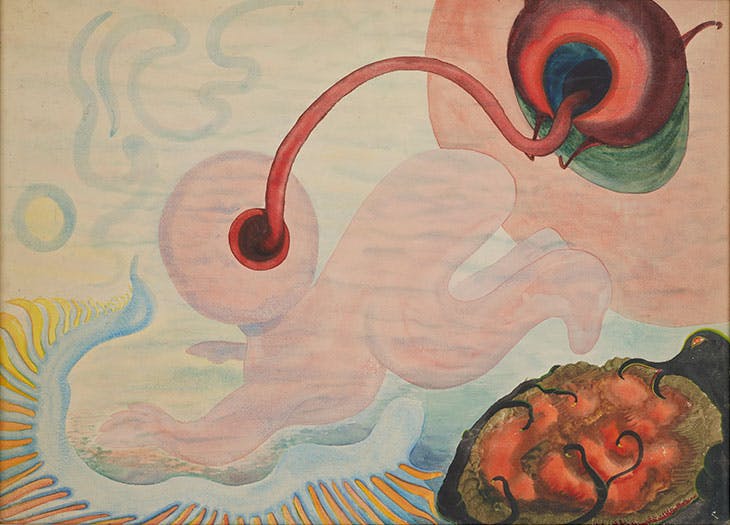 PARENT, MIMI
1924 Montreal
Mimi Parent studied at the Ecole des Beaux-Arts in Montreal, particularly at the studio of Alfred Pellan, who was the first nonconformist artist in Canada. In 1948, she married Jean Benoit, and they left for Paris for good. From 1959 on she officially joined the surrealist group, designing the poster for EROS and setting up the alcoves for the Retishism Room. She was later represented at all the major collective exhibitions as well as at the events that took place after the dissolution of the Paris group. In her canvases and then in the boxes that followed, there is a sense of potential story left hanging: figures, objects, and decors are joined in an enigmatic way. while a palette that is alternately frank and diffuse enhances the irregularity of the poetry thus expressed. Mimi Parent also illustrated texts by Guy Cabanel, Pierre Dhainaut, and José Pierre. 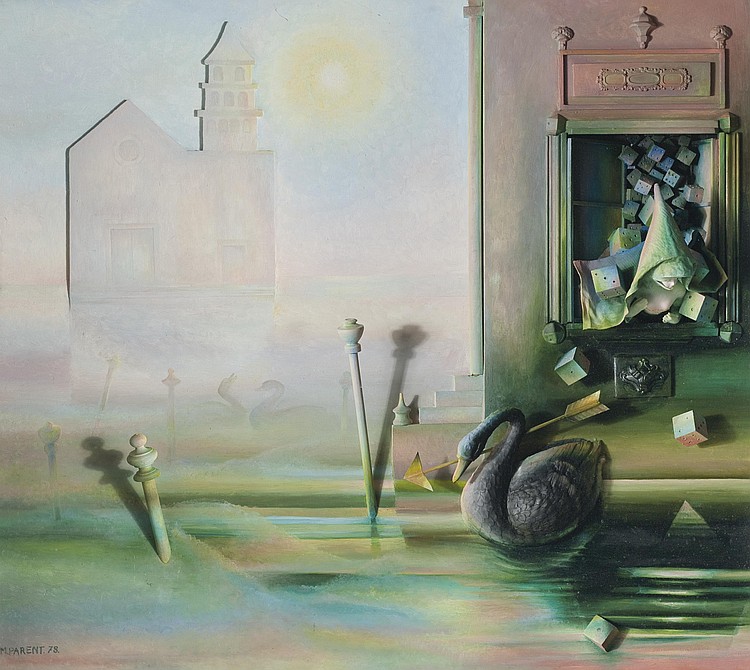 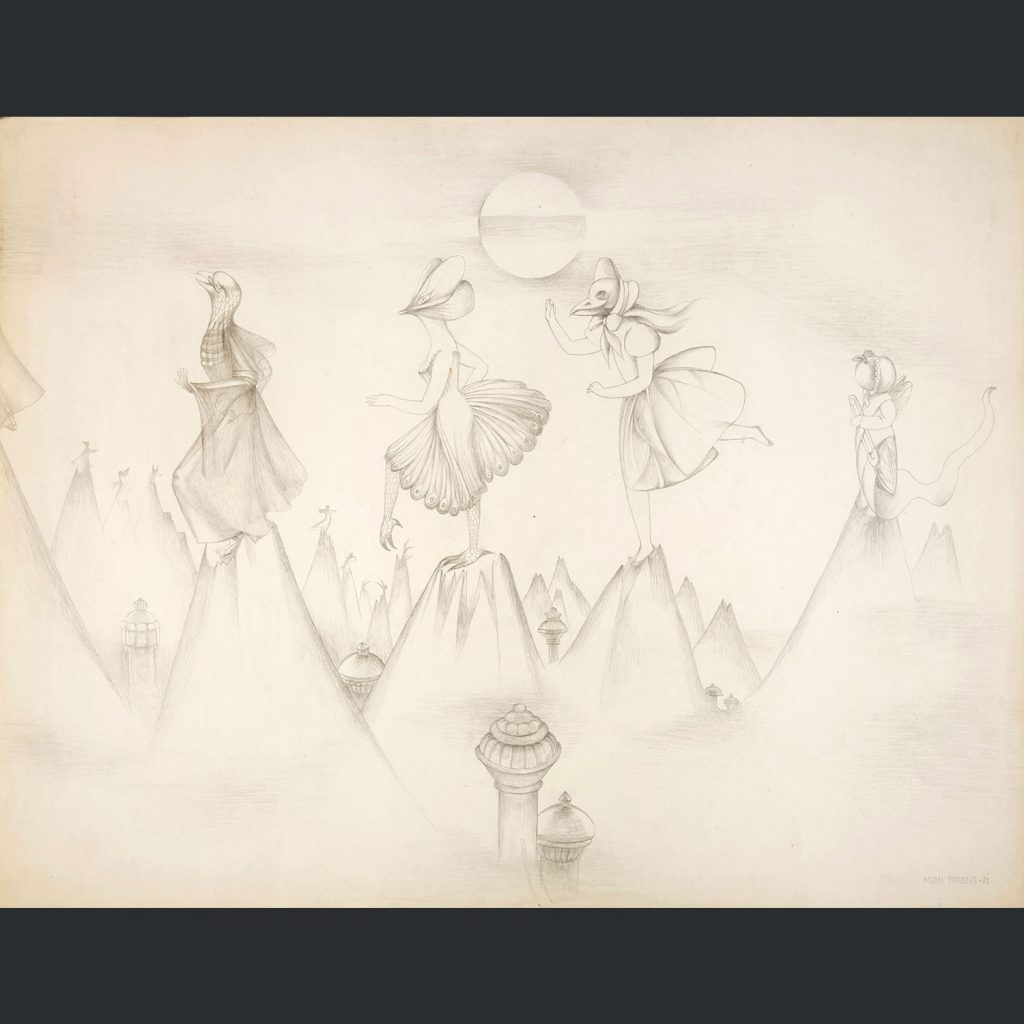