I had a week in the French alps earlier this month at a resort Les Deux Alpes and was able to do a bit of walking about especially in the parc national des écrins. And took some rudimentary shots with my phone camera which I present below.

But first here is a soundtrack to listen to while you look at the pictures.

The mountain on the right is the Aiguille de Venosc. I can’t talk definitively about the rest. 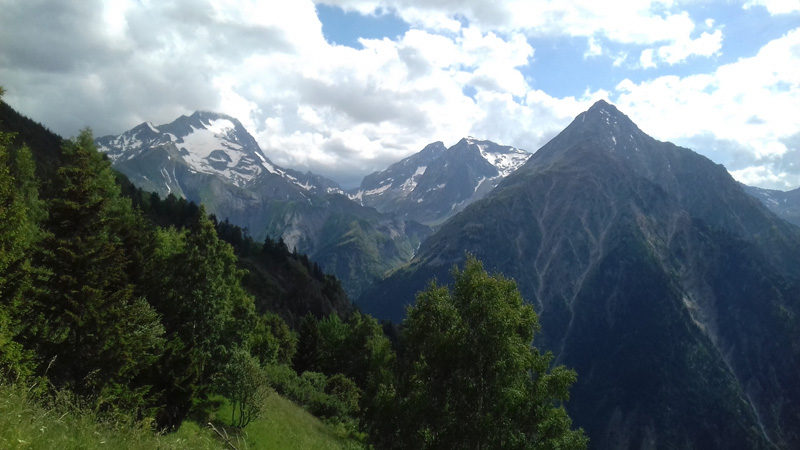 Ah that makes it a bit clearer – Aiguille de Venosc again on the right but the mountain on the left must be the Roche de la Muzelle, 3,262 metres up and it has a small glacier. 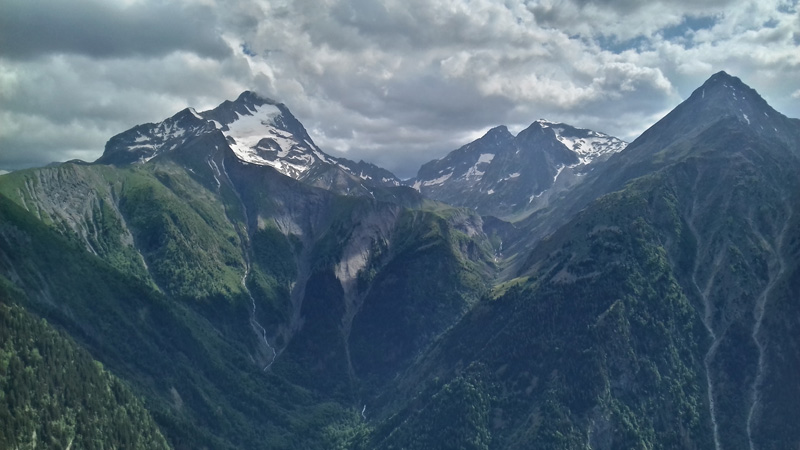 And that’s a waterfall somewhere in the middle of the forest area on the previous photo. 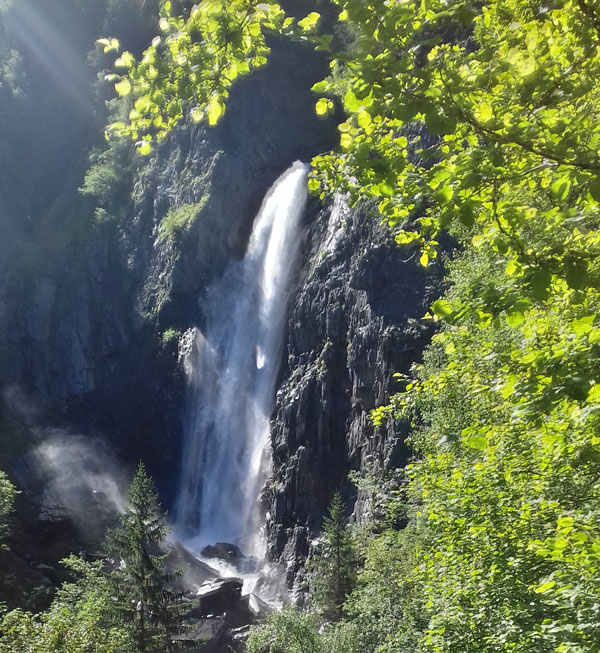 The Lac de la Muzelle. When I got to the resort all I had was a pair of sandals and I was wondering whether I’d have to buy some boots. On my first day I went out in the sandals and thought I’d see how far I could get and how it would work out. They’re good Timberland sandals with a very solid base. Basically climbing up to this lake is the equivalent of climbing Snowden from sea level and it was a baking hot day over 30 degrees and for the last 1,000 metres (and the first on the way back down) there is no shelter from the sun. In fact that quotation from an old song of mine probably went through my head at the time although there are no gorse bushes up there. Lots of similar stuff though and probably more insects than I’ve ever seen. Anyway after that I had a more restful 2nd day, but I knew that I didn’t have to buy any boots. 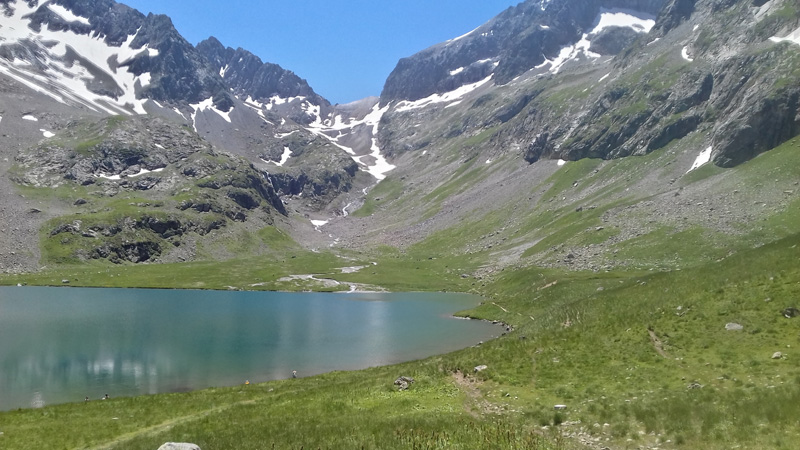 This is a crepuscule shot that needed a better camera or at least more skill on my part but it’s caught a really interesting phenomenon where a cloud seems to have come down over the glacier. 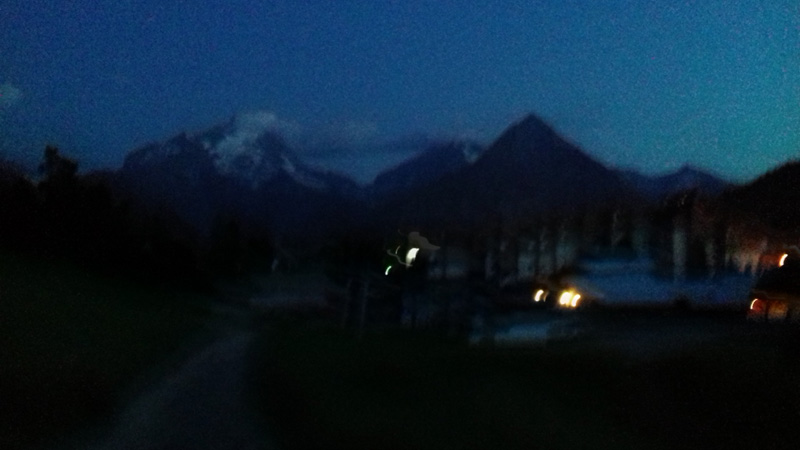 Another lake, this one’s called Le Lauvitel. It isn’t as high up at the last one being at a nice round 1,500 metres approximately. It’s bigger though, easier to get to though still a pretty steep climb. I went there twice and the 2nd time I continued higher up to a smaller lake called Lac de Plan Vianney which is probably about the highest I got to (2,250 metres apparently). As I reached the point where I could look down on the lake I came over the top and there was an ibex a few metres away although it didn’t hang about and soon left me to private enjoyment of the lake. Actually there wasn’t a great deal of enjoyment because this was very different weather than earlier described. My sandals and my feet were both soaking wet and pretty cold. My feet were stained brown from the sodden sandals. I took each sandal off one at a time and gave each foot a rub but it didn’t really help much. I had no food with me and it’s possibly not that many generations since this was too a glacier. 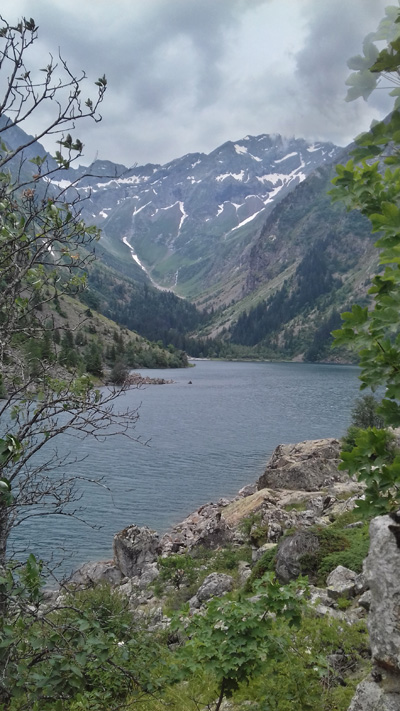 In the evening after my 1st visit to Le Lauvitel the weather had changed. You can see in the previous photo that there are clouds building up. About 7 o’ clock I went out for a walk at the other end of the resort which is when I recorded the audio track which you may or may not be listening to. This shot shows the moment shortly before a massive thunderstorm. When the torrential rain started I was probably about a mile from my hotel within a minute I was totally drenched. Luckily the temperature was still warm and it just became a 20 minute tepid shower with all your clothes on. In my hotel room I had waterproof clothing but I hadn’t bothered to take it out with me and anyway it wouldn’t have helped my feet. The happy side of the experience was that there was a whole bunch of other people who were caught out like myself. I’m not sure what they’d been doing but they seemed like a large group and one of the guys was wearing a black cloak and had a shepherd’s crook or something like that. I didn’t actually have a conversation with them but we ended up laughing a lot together. Even drowned rats can have fun. 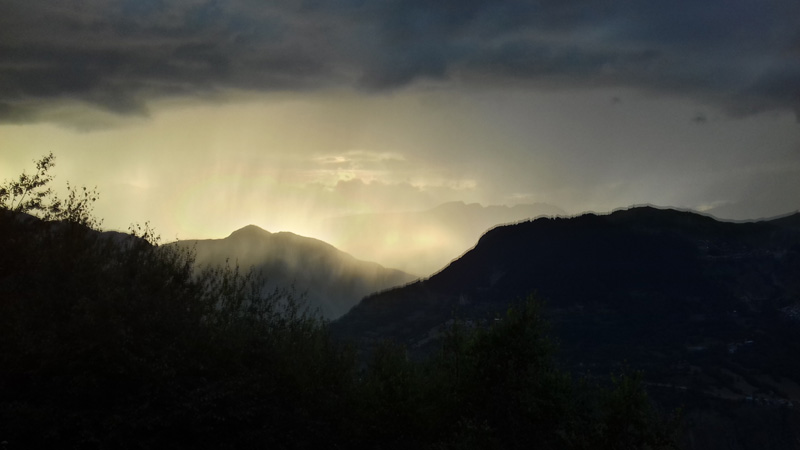 This is the other side of the resort which leads down to a reservoir, looking up to the large glacial plateau which allows people to ski most of the year. On my last day I climbed up on the left hand side of the mountain stream in this picture and then worked my way across to the ski-ing, mountain-biking side of the mountain. There’s a lot of lifts. The contrast between the natural life there and that in the national park is dramatic. 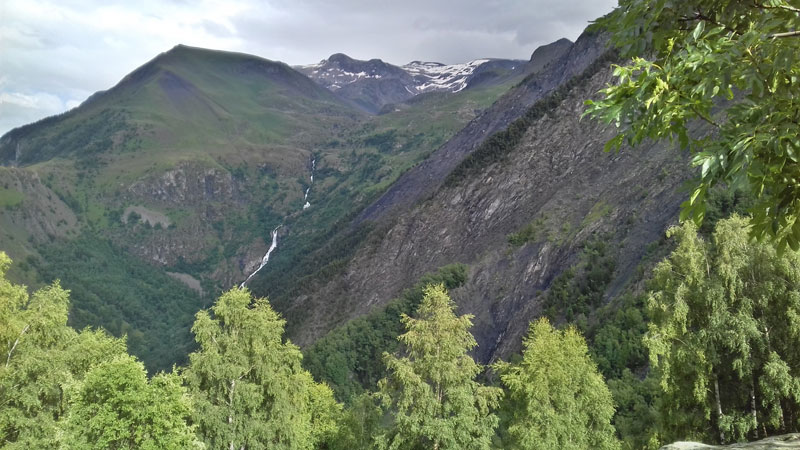 On my way up I diverted off for 10-15 minutes to get to this view of one of the cascades. 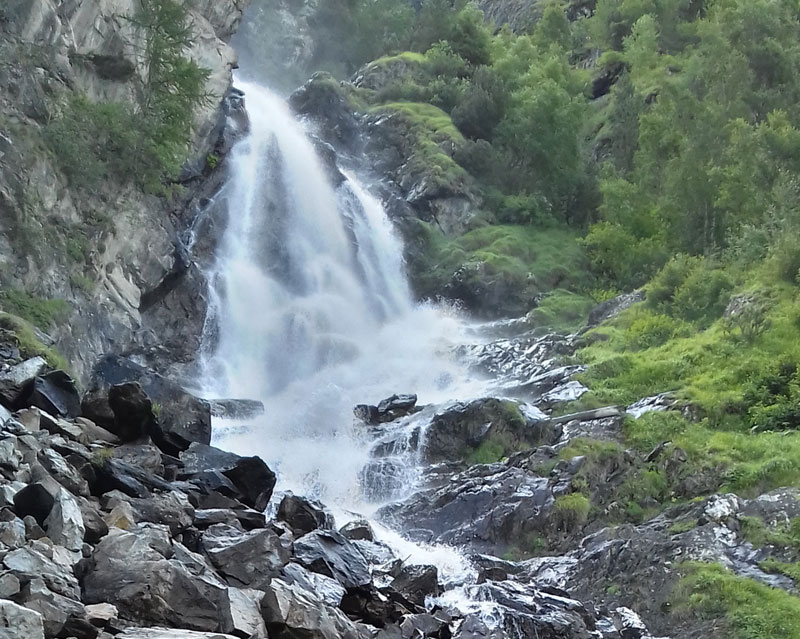 That’s the end except to say that British interest in this area of the alps perhaps didn’t start with a bang but a Whymper.