It’s been a while since I’ve turned my attention to stamps. I’d just like to point out that I wouldn’t describe myself as a stamp-enthusiast. I collected stamps between the age of about 8 to 12, the stamps I collected I still possess and now I find them a fascinating remnant of past times – geography and history resonates through my lifetime and before my lifetime.

Ok now I’ve got that off my chest I’d like to introduce the new addition to the stamp category which is insect stamps. One of the things that stamps represent is an advertisement for the country they come from. Insects are one of those things that most countries don’t want to confess to. I’d love to have a stamp which had a common British house-fly on it but honestly I don’t think such things exist, certainly not in my collection anyway. Countries generally don’t want to admit to infestations of fleas, cockroaches, locusts etc and so insects haven’t been featured as much as they should be in the world of postage.

So sadly the category is a bit hard to populate. There’s only one insect that’s easy to find on stamps and that’s the butterfly. The inference is that you’ve got to be aesthetically pleasing to end up on a stamp – no probosces or weird hairy abdomens thank you. Here’s a butterfly stamp to show you what I mean. Most stamps from Bulgaria use a Cyrillic script and I have no idea why this one doesn’t. 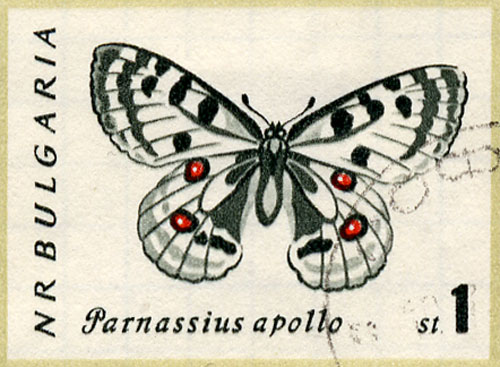 The next one’s an insect that Chile was happy to celebrate back in 1944. Known either as Darwin’s beetle, Grant’s stag beetle or the Chilean stag beetle this is a male. The female is much less elaborate, which is sexual dimorphism as I’m sure you all know. The large horns and forelegs are purely for the purposes of combat between rival males. 1944 was a hundred years after the publication of Claude Gay‘s book, Historia fisica y politica de Chile and that resulted in a large number of stamps. I’ve got a lot of them but this is the only one which depicts an insect. 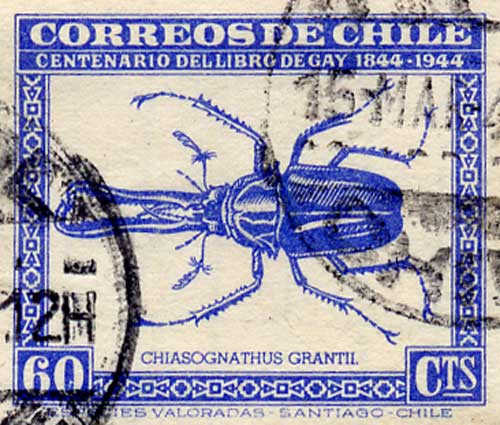 And while on the subject of beetles I would like to say that my opinion of the species is indebted to Primo Levi in his book Other People’s Trades drawing my attention to the comment of biologist Jack Haldane‘s when asked what his concept of God was – “He is inordinately fond of beetles”. Somehow I find this comforting. So here is an African beetle which is basically a flat-faced longhorns type of affair. Apparently an infestation of these little blighters can have a devastating effect on cashew. So thanks to Portuguese Guinea for breaking the mould and putting a pest on a stamp. Actually Portuguese Guinea doesn’t exist any more it’s Guinea-Bissau now. 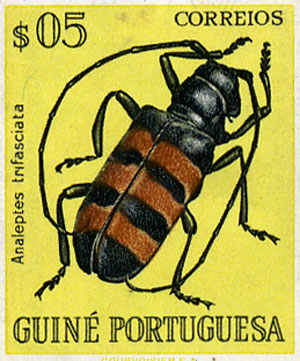 Well I’m scraping the barrel here a bit now with insect stamps. To be perfectly honest there don’t seem to be too many about. So here’s another butterfly. limenitis populi or the Poplar Admiral is a widespread Eurasian insect. One of the interesting facts that can be gleaned from Wikipedia is that

Limenitis populi has never seen coupling naturally in captivity. The manual coupling is described by Marion Weidemann, this is the Austin Platt’s method which consists to partially suffocate the male (anaesthetize in a cyanide bottle) before hand pairing (Dr. A. Platt specialized on North American Limenitis species). 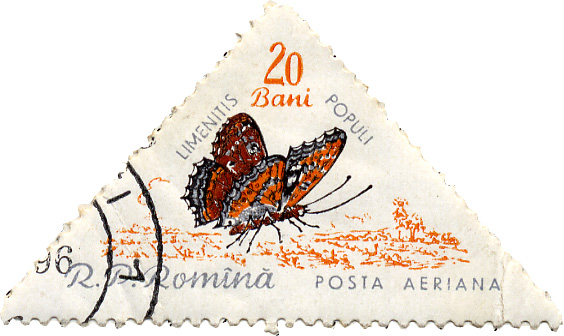 Finally I’ve completely run out of insects, but I’m sure that there must be some hidden in this stamp somewhere as apparently rhinoceroses and let’s face it most animals even some humans are riddled with insect-type parasites of some sort. This is a white rhinoceros though it doesn’t look all that white and sadly it no longer occurs in what is now the Democratic Republic of Congo. A couple of egrets contemplate this large muscular mammal and of course the 2 species have a symbiotic relationship related to the ticks that infest the rhinoceros. Actually ticks are more spiders than insects, but I would have included spiders in this category if I could have found some spider stamps. Another of the birds that might feed upon a large mammal in this way is the oxpecker. Apparently the oxpecker has got so much of a taste for the blood of the carrying mammal which is in effect the main flavour of eating a full-bellied tick that they will work at wounds and feed directly on the larger creature’s blood. The rhinoceros seems to accept the birds as a necessary evil. 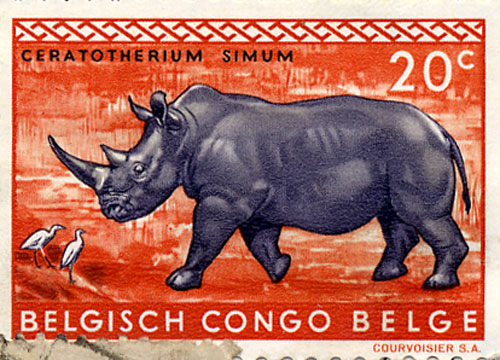