The present instance of the micromuseum is a book published in 1961 by Thomas Nelson & Sons Ltd. The publishers at this point had offices in Edinburgh, London, Melbourne, Johannesburg, Toronto, New York and there was also the Société Française D’Éditions Nelson in Paris.

During the middle years of the 20th century they published many children’s books in various series such as the Good Luck Series. For example, The Disobedient Cuckoo Clock

or, also from 1951, in the Children’s Own Series, The Road That Lost Its Way

Actually that one looks so great I’m determined to track down a copy and have one of my own, but only if it’s got a decent quality dust jacket.

I only have one Good Luck Series book and that is called Angus The Tartan Partan. It was written by a lady called Janet Caird and she used to be a near neighbour of my family’s when I was very small and lived in Dollar, Clackmannanshire. This is a first edition and signed by the author. Someone in Australia has a copy I would have to pay over £80 for. Presumably not signed by the author. No items in the micromuseum are for sale, but I probably do have my price for them, but bear in mind that they are all to a greater or lesser degree inflated by nostalgic value.

I asked my mother if she had any memories of Janet Caird. Her first thought was that she could still remember a joke she had told her.

A Scotsman is in a cafe and the waitress asks him what he wants for his dessert.

-Do you want an eclair or a meringue?

It’s a linguistic, punny sort of joke, ideal for an author. Janet went on to write a series of crime thrillers.

Like the other books figured above this book is an epic of anthropomorphism. Partan is a Scottish word for a crab. The whole idea for the book revolves around a rhyming wordplay.

I won’t give the story away, but here are a few images from the book, firstly the frontispiece. 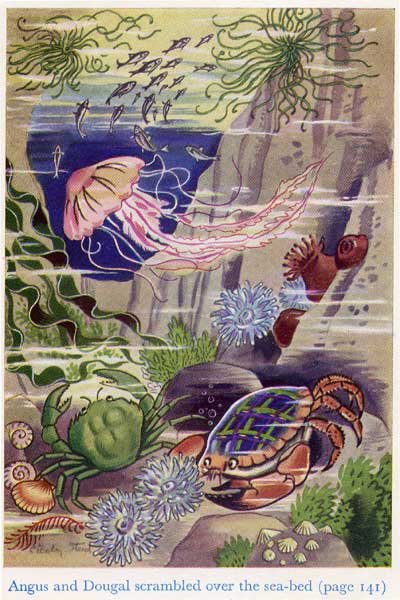 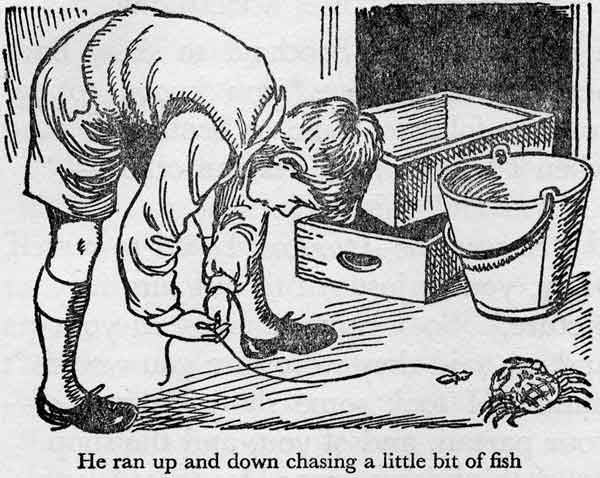 A few days ago I was just reading the passage below, probably late at night and thought it was so good that I had to make it the first of a new set of quotations from Gutenberg-downloaded texts as I have in the past see short list following.

Now this is the bit I was reading and then I’ve selected some more excerpts – I hope they’re ok for you. If not, catch you next time round.

_29th October, 1866._–We marched westwards to Makosa’s village, and
could not go further, as the next stage is long and through an
ill-peopled country. The morning was lovely, the whole country bathed
in bright sunlight, and not a breath of air disturbed the smoke as it
slowly curled up from the heaps of burning weeds, which the native
agriculturist wisely destroys. The people generally were busy hoeing
in the cool of the day. One old man in a village where we rested had
trained the little hair he had left into a tail, which, well plastered
with fat, he had bent on itself and laid flat on his crown; another
was carefully paring a stick for stirring the porridge, and others
were enjoying the cool shade of the wild fig-trees which are always
planted at villages. It is a sacred tree all over Africa and India,
and the tender roots which drop down towards the ground are used as
medicine–a universal remedy. Can it be a tradition of its being like
the tree of life, which Archbishop Whately conjectures may have been
used in Paradise to render man immortal? One kind of fig-tree is often
seen hacked all over to get the sap, which is used as bird-lime;
bark-cloth is made of it too. I like to see the men weaving or
spinning, or reclining under these glorious canopies, as much as I
love to see our more civilized people lolling on their sofas or
ottomans.

What can I say? The humanity of the man bleeds through with every sentence. Only his wife and his children could possibly be allowed to criticise him.

The Memoirs of Saint-Simon

The Memoirs of M. de la Rochefoucauld appeared. They contained certain atrocious and false statements against my father, who so severely resented the calumny, that he seized a pen, and wrote upon the margin of the book, “The author has told a lie.” Not content with this, he went to the bookseller, whom he discovered with some difficulty, for the book was not sold publicly at first. He asked to see all the copies of the work, prayed, promised, threatened, and at last succeeded in obtaining them. Then he took a pen and wrote in all of them the same marginal note. The astonishment of the
bookseller may be imagined. He was not long in letting M. de la Rochefoucauld know what had happened to his books: it may well be believed that he also was astonished. This affair made great noise. My father, having truth on his side, wished to obtain public satisfaction from M. de la Rochefoucauld. Friends, however, interposed, and the matter was allowed to drop. But M. de la Rochefoucauld never pardoned my father; so true it is that we less easily forget the injuries we inflict than those that we receive.

I wonder if there are any of those books left in existence and if so how much they are worth.

About this time, Kalanus, who had for some days been suffering from some internal disorder, begged that a funeral pile might be erected for him. He rode up to it on horseback, said a prayer, poured a libation for himself and cut off a lock of his own hair, as is usual at a sacrifice, and then, mounting the pile, shook hands with those Macedonians who were present, bidding them be of good cheer that day, and drink deep at the king’s table. He added, that he himself should shortly see the king at Babylon. Having spoken thus he lay down and covered himself over. He did not move when the fire reached him, but remained in the same posture until he was consumed, thus sacrificing himself to the gods after the manner of the Indian philosophers. Many years afterwards another Indian, a friend of Cæsar, did the like in the city of Athens; and at the present day his sepulchre is shown under the name of “the Indian’s tomb.”

LXX. After Alexander left the funeral pyre, he invited many of his friends and chief officers to dinner, and offered a prize to the man who could drink most unmixed wine. Promachus, who won it, drank as much as four choes. He was presented with a golden crown worth a talent, and lived only three days afterwards. Of the others, Chares, the historian, tells us that forty-one died of an extreme cold that came upon them in their drunkenness.

For some reason I always go for these tales of alcoholic excess. Perhaps, as a very nice woman who I have never met pointed out to me this week “the universe is trying to tell (me) something”. Meanwhile I knock back another sip of neat vodka. Still I’m balancing it up with organic apple, ginger, almonds and dried apricots. Could be worse.

Cowboy Songs and other Frontier Ballads

Come all ye railroad section men an’ listen to my song,
It is of Larry O’Sullivan who now is dead and gone.
For twinty years a section boss, he niver hired a tar—
Oh, it’s “j’int ahead and cinter back,
An’ Jerry, go ile that car!”

For twinty years a section boss, he niver hired a tar,
But it’s “j’int ahead an cinter back,
An’ Jerry, go ile that car-r-r!”

For twinty years a section boss, he worked upon the track,
And be it to his cred-i-it he niver had a wrack.
For he kept every j’int right up to the p’int wid the tap of the tampin-bar-r-r;
And while the byes was a-swimmin’ up the ties,
It’s “Jerry, wud yez ile that car-r-r!”

God rest ye, Larry O’Sullivan, to me ye were kind and good;
Ye always made the section men go out and chop me wood;
An’fetch me wather from the well an’chop me kindlin’ fine;
And any man that wouldn’t lind a hand, ’twas Larry give him his Time.

And ivery Sunday morni-i-ing unto the gang he’d say:
”Me byes, prepare—yez be aware the ould lady goes to church the day.
Now, I want ivery man to pump the best he can, for the distance it is far-r-r;
An’ we have to get in ahead of number tin—
So, Jerry, go an’ ile that car-r-r!”

‘Twas in November in the winter time and the ground all covered wid snow,
“Come put the hand-car-r-r on the track an’ over the section go!”
Wid his big soger coat buttoned up to his t’roat, all weathers he would dare—
An’ it’s “Paddy Mack, will yez walk the track,
An’ Jerry, go an’ ile that car-r-r!”

“Give my respects to the roadmas-ther,” poor Larry he did cry, ”
An lave me up that I may see the ould hand-car before I die.
Come, j’int ahead an’ cinter back,
An’ Jerry, go an’ ile that car-r-r!”

Then lay the spike maul upon his chist, the gauge, and the ould claw-bar-r-r,
And while the byes do be fillin’ up his grave,
”Oh, Jerry, go an’ ile that car-r-r!”

Just a few ideas on this subject. Comes out of ballad tradition – see Scandinavian/Viking traditions – Icelandic because it was isolated and allowed to hang over till the era of the written word. New technologies and industries, in this case the railroad, brought new linguistic possibilities. I particularly like the last verse with its spike maul and its ould claw-bar-r-r.

This is where the books are