now we’ve passed christmas and the next big thing in the religious calendar is easter which this year will be april 20 (sunday). this year easter marks the 37th anniversary of my first experience of travelling abroad when in 1967 i visited spain and morocco with my father.

here are a few of the images from morocco that i have manipulated i’m afraid these are taken from scans of slides and either i could clean the slides or i could spend hours tidying them up in photoshop but i haven’t so forgive the visual noise.

below the peluqueria victoria sign (peluqueria is hairdresser) more street life. i think there’s something special about old poster images but the people are cool too

and now here’s me with mrs taylor who my dad and i were staying with – her and her husband mr taylor. we are standing by a very old tree. possibly the oldest tree in central tangier. as you can see i was wearing my school uniform because it was the only clothes i had that were smart and for some reason it was important for me to be smart in tangier. whether that was my idea or my father’s idea i can’t remember. but i’m sure that i caused quite a stir dressed like that when i went with my father and mr taylor to a restaurant one night in the casbah. as we walked through a busy bazaar type shopping area with traders standing outside in the narrow street they passed many appreciative comments my way :-
ah eenglish schoolboy
bobby charlton
england had just won the world cup so they were trying to impress me with their knowledge of english football players 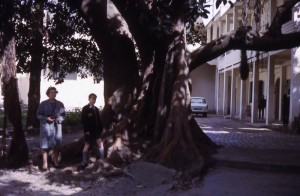 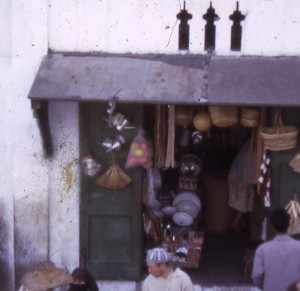 mr and mrs taylor used to be our neighbours when we lived in dollar, scotland in the fifties. i think mr taylor’s grandfather had ran the sultan’s mill for him sometime in the 1st half of the 20th century and they had inherited the property and gone out to live there after retiring. at the back of the garden there was the huge wall of the casbah and then on the other side you looked straight across to the gateway to the market. the gateway large enough to contain a table where they sold various breads. while i stayed there i can only remember being totally drawn to the windows where i could watch all this while hidden to the passers-by. i imagine that this fascination was evident to my gentle hosts and i’m sure they felt some sort of gratification at this.