When I was about 8 or 9 my dad bought a record and encouraged everyone in the family to listen to it. I was the youngest. We all enjoyed it and to me then it was sort of a breakthrough into what you could find funny. It was sick but it was also very clever and made you think about things. The songs on the record were copyrighted in 1952 and 1953. Lynch’s Blue Velvet is like an 80s remake. Samuel Franklin George Dwight Gloop, son of Mayor Gloop, turns into Frank Booth

I still have the 10″ record which I guess didn’t hit the British market until the early 60s about the time my dad bought it. Here’s the front cover. 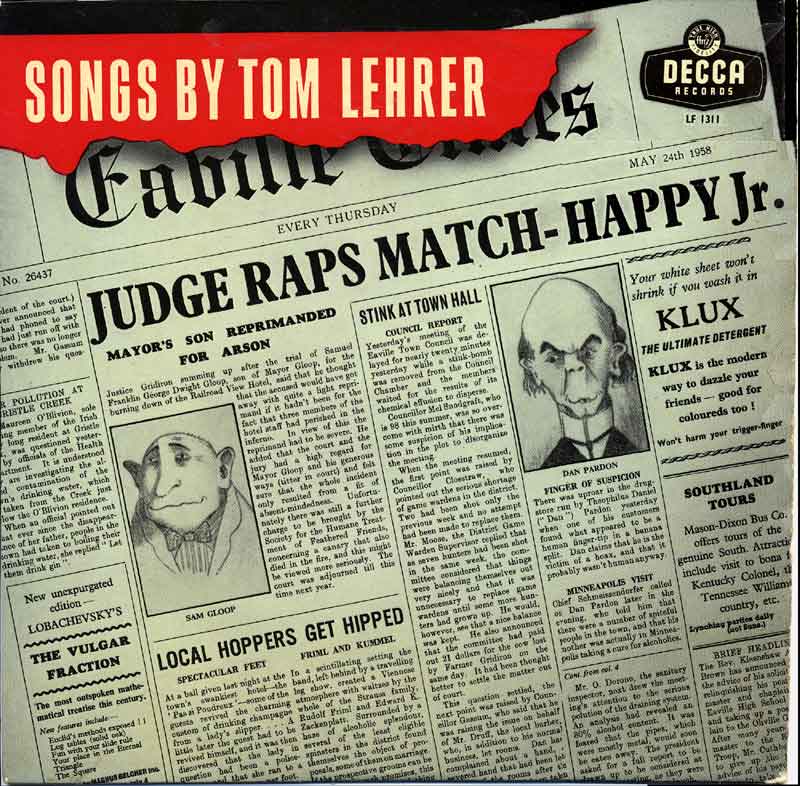 Below I’ve embedded a clip of Lehrer performing 2 songs the 2nd of which is from this album. But before that here’s a few quotations from the great man from an interview he gave about 10 years ago.

Laughter is involuntary. If it’s funny you laugh. But you can easily clap just to say ‘A ha, that’s funny, I think that’s funny.’ Sometimes they cut to the audience and you can see they are applauding madly. But they’re not laughing.

I have become, you might call it mature I would call it senile and I can see both sides. But you can’t write a satirical song with ‘but on the other hand’ in it, or ‘however’. It’s got to be one-sided.

The people who go to comedy shows are kids that don’t know anything, I think, and so you have to make jokes about your girlfriend or your family or that kind of thing only, make them as vulgar as possible.

The audience usually has to be with you, I’m afraid. I always regarded myself as not even preaching to the converted, I was titillating the converted.