Where could it have led to? The king must surely know by now.

The strangest thing so far has been the disappearance of the cockroach’s money-sac and its subsequent reappearance in the blast furnace.

It’s done – this morning! Down in the street towards the harbour! The black flag unfurled!

We were bundled out neck and heals – and so you see me now – licked and cheated.

The water-loon. It lays its eggs in early April.

Scarcely have I seen a more vacuous element. Do you mean to say this is watchulimina? I’d never have thought it.

Between times they flayed a little contrabass and simulated a pagenzo. It seemed to radidate from an indicular variation.

There’s lemons, tea and borage. If that’s not enough then deprive me of my sickle. Your need and all that. 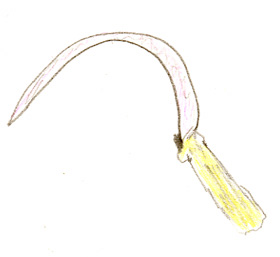 Values, today, are somewhat different to when I was a young man. You’d scarcely believe it, but…

You resemble a coelocanth – it’s the truth – plain and simple. Just like.

Don’t for one second think I care. I’ll prove to you what it is about him. I suppose you think you know him? Well you don’t. Take it from me. He puts on a show. He’s not like that. Underneath he’s different. Do you see?

You act so sad. What’s changed?

Only thrifty more sages shall pass. If they don’t they’ll suffer. Or not. I scarcely care. What about you?

Silkily and waxed over sideways.

The most provocative whiskers I’ve seen since our childhood in the Punjab. If only you could find someone they’d fit.

Has it any pockets?

Mysteriously slow approximations of a significant latitude proceeded at quite a rate. Until the aforementioned dovetail was eventually consumed and the apprentice bakers returned to their digs.

Sweet-smelling sedge, in handfuls. Do you want some? What for? Have you none of your own?

This is a bicycle. That’s a chain-saw. Do what you want with them.

Not sixteen this time.

Can you dance the polka?

Scamp! Mischievous little rogue! If I catch you in here again I’ll bury you in the orchard – head down.

She’s the one wearing the kilt – over there.

Drums started to beat in all the houses. I was trying to get the stains off an old shirt when a ragged young urchin ran past me on the pavement. Where are you off I cried. He stopped and gave me the most pathetic look.

Meet me by the precipice.

Winches at sea. Pots of plenty. Haul me in Sally my boy.

Here, look at the latest one. It’s the stuff isn’t it. Great job. What do you think, Castrox?

The weight buckled and he fell Splat! on the carpet. Before I knew where I was the poker was in my hand and I belted him one.

Meanwhile the moon had risen, milk-pregnant, serene in the ice-filled canopy of the sky.

I’ve rummaged in the garbage for 6 hours. Can’t I go home now?

Whisk me off to a Polynesian island. I think I’ve just wet myself again.

Listen to this record – it’s one of my favourites. Do you like it? Shall we dance? Your hands – they’re so cold. Here – warm them on my shoulder-blades.

In the conical flask.

You must not betray your country. For what, after all, have you lived? Tell me that. Where’s the good in it?

I hate drama – of all the convulsive nightmares that might occur to a diseased, maggot-ridden brain it is surely the greatest and most prevalent these days.

Take your wristwatch off.

Administered by her own hand, they say.

There was a railway, with a train in the distance. We were out collecting ice. Hacking it up with pickaxes and filling our rucksacks. That’s all I remember. I’m going to sleep now. Will you turn off the light or shall I?

In a sense, that’s true.

Who did you say?

When you’ve bent your diaphragm in I’d like you to place all the pegs on this small table.

He’s a man of distinction by all accounts, but watch out for the ferret he keeps underneath his shirt – it’s called Graham and it packs a venomous snuffle.

He’s at the dentist’s.

Clichés are to a nation’s tongue what ivy is to a tree. And that’s why these things are dying. The new image is too contrived now… Are you listening?

You’ve pulled the bedclothes over your head, I can see. But it won’t do you any good. I intend to punish you. Severely. Severely punish you. Do you understand?

He kissed me. My two top buttons were undone. He kissed my bare shoulder. I can’t describe how it felt. I felt like an ice-lolly. And then he smiled at me.

Playfully so. I can’t deny it. …Will you accompany me to the tram terminus – I think I left my copy of Dirripinny’s Autobiography there. 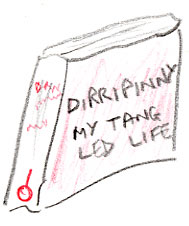 There’s no need to feel proud that you’ve caught syphilis. Not even a sailor would be proud of that. I don’t care if she was a princess – it’s a filthy disease and I hope you suffer hard and long.

A witless witness, if you’ll excuse the pun.

I’ve never seen nothing like it. It’s terrific. Bit of a laugh anyway.

We the experts challenge you the laymen to a spot of digging. Any takers?

The epidemic’s started, the street is full of rotting brains that stink like burnt vegetables left to cook for all time itself. Time with a big T and innumerable little dots after it.

By the sea, in a chalet. Sheltered from the raging wind.

Whenever I look out of my window I see a public official sliding on the ice in the street – trying desperately to keep balance and maintain dignity. Here take a look. Is there anyone there? I wish – I do wish I was back at Tresthofs now when it is so cold and the gutters point their frozen fingers matching the pointed railings. There’s so much to do there. Here it may as well be… I don’t know what. There’s nothing to do except look out of windows at people sliding on ice.

What shall we play?

Are you afraid of me?

Don’t think I enjoy this. I don’t need your jealousy – it’s not as if I’m having a good time myself. I hate all this too. 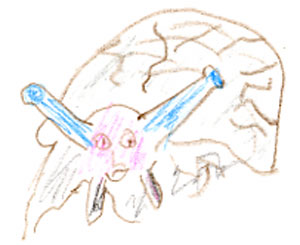 When will it stop raining?

Pass me by once more and I’ll shower you with pus.

The candyman’s here again. Shall I show him in?

This way, this way please.

So at last you’re here. I’ve been wanting to tell you for ages so listen now. You were related to me through my father’s brother. But that’s not all. Alas it’s a grim tale I have to tell.

She was hanging in a huge basket, strung from the four corners of the ceiling. I waved but she didn’t seem to see me.

What sort are you anyway?

Green and purple stripes with a crescent moon recumbent. 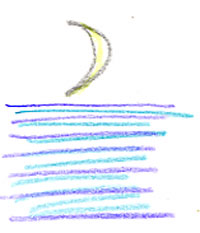 How deep is the dungeon – how sturdy is the oak – how effortless are all your attempts to transfigure the daylight.

Waking up to a bird’s sonata – it beats everything.

What sort of hat do you prefer – crumpled or twisted?

If you don’t pause temporarily I shall shake you by the collar-bone until your Adam’s apple comes loose in your throat and pops out of your mouth.

This entry was posted in nonsense, prose and tagged fool's gold, pots of plenty, winches at sea. Bookmark the permalink.