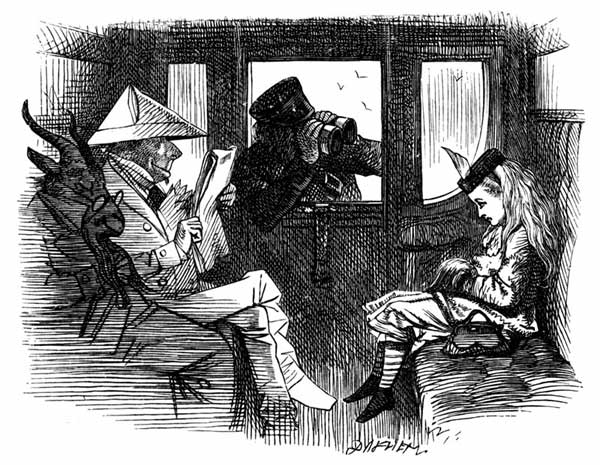 All this time the Guard was looking at her, first through a telescope, then through a microscope, and then through an opera-glass. At last he said, “You’re travelling the wrong way,” and shut up the window and went away.
“So young a child,” said the gentleman sitting opposite to her (he was dressed in white paper), “ought to know which way she’s going, even if she doesn’t know her own name!”
A Goat, that was sitting next to the gentleman in white, shut his eyes and said in a loud voice, “She ought to know her way to the ticket-office, even if she doesn’t know her alphabet!”
There was a Beetle sitting next to the Goat (it was a very queer carriage-full of passengers altogether), and, as the rule seemed to be that they should all speak in turn, HE went on with “She’ll have to go back from here as luggage!”
Alice couldn’t see who was sitting beyond the Beetle, but a hoarse voice spoke next. “Change engines—” it said, and was obliged to leave off.
“It sounds like a horse,” Alice thought to herself. And an extremely small voice, close to her ear, said, “You might make a joke on that—something about ‘horse’ and ‘hoarse,’ you know.”
Then a very gentle voice in the distance said, “She must be labelled ‘Lass, with care,’ you know—”

Nearly 20 years after Edward Lear’s Book of Nonsense, a book called Alice’s Adventures in Wonderland was published under the pen-name of Lewis Carroll. (The excerpt above is from Alice Through the Looking-Glass which came out 6 years later). Carroll’s 2 Alice books were extended Nonsense works that took the genre into new territory. Both books are based around games, the first one being cards and the second one chess. In addition there was a good deal of fantastical invention that normally wouldn’t be expected from a clergyman and tutor of Mathematics. Further inspiration was drawn from the world of Nursery Rhymes, for example in Through the Looking Glass, Humpty Dumpty, Tweedledum and Tweedledee and the Lion and the Unicorn. A lot of the verbal humour comes from wordplay as in the last 3 paragraphs quoted above. Of course, Shakespeare did this too in his comic moments nearly 300 years earlier and even today some of the more childish of the British newspapers still delight in it (actually they’re all to some extent childish it seems to me these days).

Carroll wrote a more sophisticated fantasy/nonsense book some 20 years later which is called Sylvie and Bruno. It’s not very well known today but is worth a look if you like the Alice books. You can download it at The Gutenberg Project.

In 1935 TE Lawrence publically published his book The Seven Pillars of Wisdom and on the title page he sub-titled the work A Triumph. And why not? Both of Carroll’s Alice books could be sub-titled similarly I think. A Triumph of Nonsense.

Finally the only direct reference I have in a song to these matters comes in a rather schizophrenic ditty of mine which was written in 2006 and appears on my disparue album. I include it below. Apart from myself it features Paul Wigens on drums and Jeff Spencer on bass guitar.

This entry was posted in nonsense and tagged lewis carroll, neureille. Bookmark the permalink.