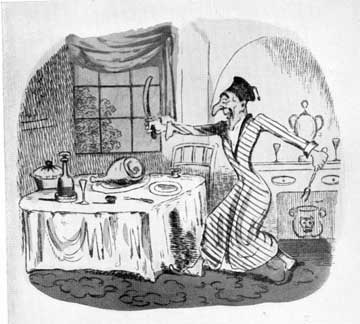 There was an old man of Tobago,
Who lived on rice, gruel, and sago;
Till, much to his bliss,
His physician said this –
To a leg, sir, of mutton you may go

from Anecdotes and Adventures of Fifteen Gentleman (1822)

Long years ago, in the days when much of my time was passed in a country home, where children and mirth abounded, the lines beginning There was an old man of Tobago, were suggested to me by a valued friend, as a form of verse lending itself to limitless variety for Rhymes and Pictures; and thenceforth the greater part of the original drawings and verses for the first Book of Nonsense were struck off.

The majority of nursery rhymes are not strictly speaking Nonsense except in that they are generally without point or purpose. For example,

Now
what do you think
Of little Jack Jingle?
Before he was married
He used to live single;
But after he married
(To alter his life)
He left off living single
And lived with his wife

Robert Barnes, fellow fine
Can you shoe this horse of mine?
Yes, good sir, that I can,
As well as any other man.
There’s a nail, and there’s a prod,
And now, good sir, your horse is shod.

Others are nonsensical as,

I had a little hen,
The prettiest ever seen;
She washed up the dishes,
And kept the house clean.
She went to the mill
To fetch me some flour,
And always got home
In less than an hour.
She baked me my bread
She brewed me my ale,
She sat by the fire
And told a fine tale.

It is typical that the Nonsense element involves other creatures acting in a human manner. Sometimes even inanimate objects are personified,

The sow came in with the saddle
The little pig rocked the cradle
The dish jumped up on the table
To see the pot swallow the ladle
The spit that stood behind the door
Threw the pudding-stick on the floor
Odd’s bobs! says the gridiron
Can’t you agree?
I’m the head constable
Bring them to me

Most of these examples come from The Oxford Dictionary of Nursery Rhymes, Iona & Peter Opie’s book written not long before I was born. I grew up with this book on a bookshelf somewhere nearby but it wasn’t until early 2009 that I actually read the book from cover to cover. While doing so I had the idea of writing a song that would try to be a contemporary nursery rhyme. Then one night on my way home from the Bank Tavern in Broadmead, Bristol, after having played there and drunk strong cider and vodka I muttered a number of incoherent babblings into my mobile phone voice recorder. Next day or thereabouts I reworked the words possibly adding a couple of lines. In actual fact it’s nothing like a nursery rhyme, except maybe the chorus. This song is on the new neureille album amanogawa which I am just finalising and you can hear it below. Myself on guitar and vocals, Paul Wigens on drums, Laura Lambell on bass guitar and vocals.

This entry was posted in music, nonsense and tagged amanogawa, edward lear, in my jar, neureille. Bookmark the permalink.