in 2009 & 2010 I was working part-time on the new museum of bristol which is due to open this summer. the actual building I did my work in was the city museum and art gallery, an edwardian baroque building, which is a picturesque place to spend the day though in summer like being in a greenhouse and in winter either too hot or too cold.

anyway it was while I was there that the idea of my micromuseum began to germinate. something must have precipitated the idea initially but I can’t remember what that was. to develop the idea further I have decided to use blog posts to catalogue the exhibits as I think of them or track them down in the relatively small space that is currently my home.

as it’s a micromuseum I will start the catalogue with something small. of course I don’t approve of traffic in ivory, but this object is old and although I have no memory of how I obtained it, there is still a story that can be told. 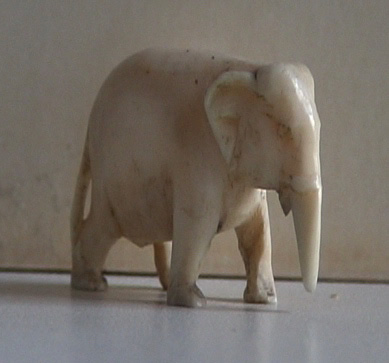 this is a relic of a larger piece, there’s evidence of metal pins in 2 of the feet. I’ve got a vague feeling that I used to have the rest of it but I can’t remember exactly what it was. 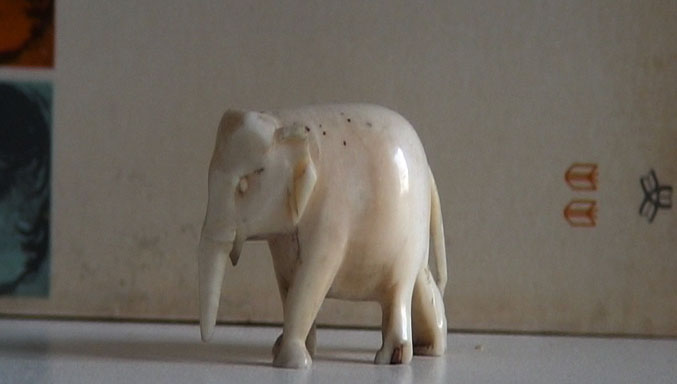 the 2nd picture shows that the left ear has been damaged at some point and also
shows where one of the metal pins was. again something’s slightly broken around the foot. otherwise it’s a shiny replica of what was once part of a living animal and then later was carved by a skilled but undoubtedly poor asian person presumably a man but what do I know? later sold to a member of the white ruling class and eventually finding its way back to the mother country. today’s heirlooms are tomorrow’s antiques.

whatever, it’s now part of this micromuseum. I don’t want to anthropomorphise my objects straight away really but I’m sure that my little white elephant is happy to feel that it’s part of a collection.

This entry was posted in micromuseum. Bookmark the permalink.